Since returning from our trip, we’ve been spending our days getting reacclimated to New York and searching for what might be next. We decided to take a break from that to visit our families for Easter. Denise went to California and I headed to Kansas City, where my family celebrated not one but two important holidays. While many people are much more familiar with the celebration of St. Patrick on March 17, there is another saint who can be praised by Western Christians in the month of March. St. Joseph’s Day is celebrated on March 19. A lot of my family’s traditions come from Sicily, where he is regarded by many as their patron saint. The story goes back to the middle ages when there was a horrible drought in Sicily. The people prayed to Saint Joseph, promising that if he answered their prayers, they would prepare a large feast to honor him. The rain did come, and the people of Sicily had a huge banquet for their patron saint. The traditions that have come from this vary throughout cities and countries around the world. Last Sunday the table continued at my family’s restaurant, Anthony’s, in Kansas City. My parents Teresa and Butch Spino opened Anthony’s in 1979 and started their own table that same year. Then there were barely a fraction of the trays of cookies that you will see now. The table has grown and now fills most of the dining room. My parents never charge for any food on this day, and their family, friends, and customers give donations instead that go to Children’s Mercy Hospital and Saint Jude’s in Kansas City. This year the proceeds went to a family in the community that has a teenager fighting cancer.
I got to Anthony’s early Sunday morning with a van full of cookies from my mom and her army of family and friends. That’s right, ladies start baking cookies weeks before the actual day. The Saint Joseph Table at Anthony’s has some of the best Italian cookies in the world. But before you start sampling peanut butter balls, cannolis or tha thus (that’s the chocolate clove Italian cookie), you must have a dish of pasta milanese. Pasta milanese is made with tomato sauce, asparagus, cauliflower, raisins and sardines served over a bed of spaghetti. Saint Joseph was a carpenter so the pasta is covered with breadcrumbs which symbolizes sawdust. This year there seemed to be a frozia or frittata for everyone. A frozia is an egg-based Italian dish similar to an omelette or crustless quiche, enriched with ingredients such as asparagus, mushrooms, tomatoes, garlic, and onions. Fava beans were the crop which saved the population from starvation and a traditional part of St. Joseph’s Day altars and traditions. Legend has it that you will never be broke as long as you carry three. Some people believe that if you keep one in the pantry, there will always be food in the kitchen.
Arriving early I got to see the early shift in action, which is made up of all of my dad’s friends. They are responsible for the milanese and the frozias. While they are busy chopping, stirring and mixing all of the ingredients, there are Italian songs playing in the background. When the guys are almost finished the crew that sets the table start to file in and within a couple of hours my family’s restaurant is transformed into an altar to Saint Joseph. This year, Father Powers, a dear friend of the family’s from the cathedral, blessed the table. The doors opened at 2pm and the restaurant was full by 2:30. Anthony’s stayed busy all day and after all of the hard work by so many people in the community, it was another success.  After seeing so much around the world this last year it’s great to come home and see some things never change. 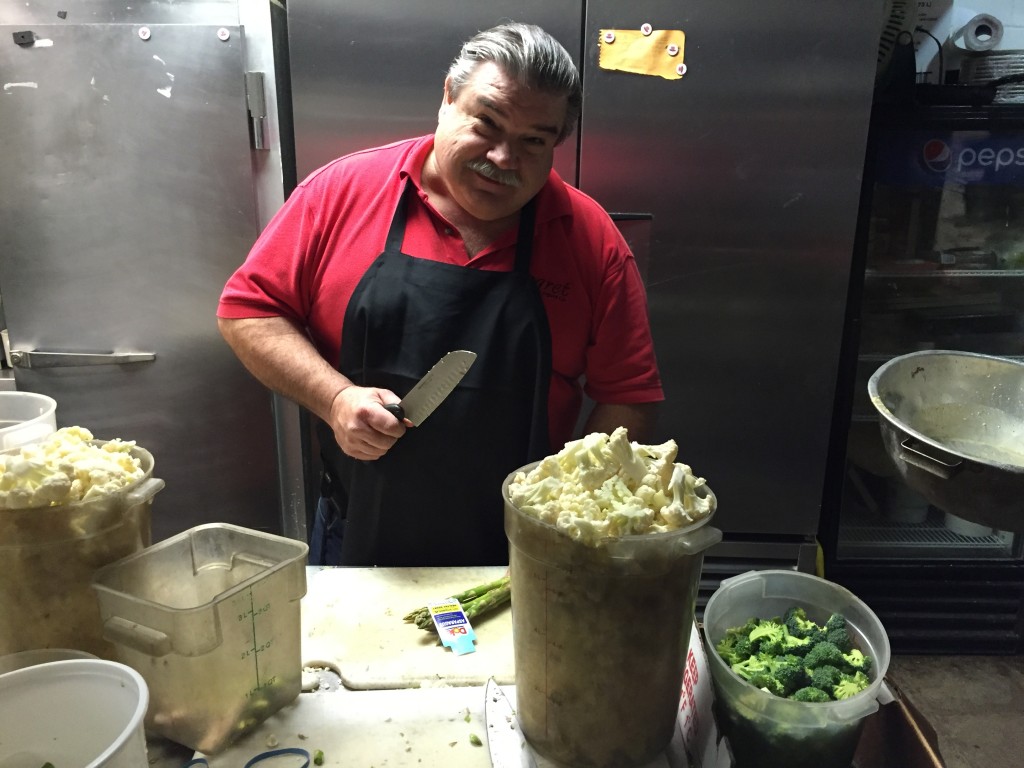 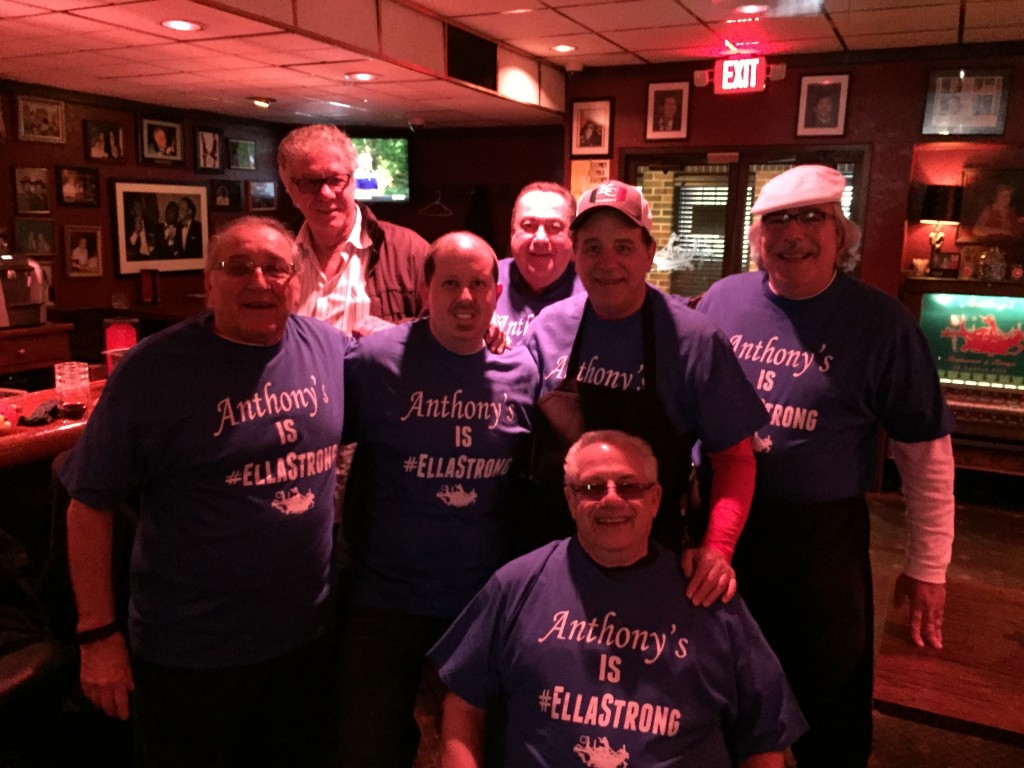 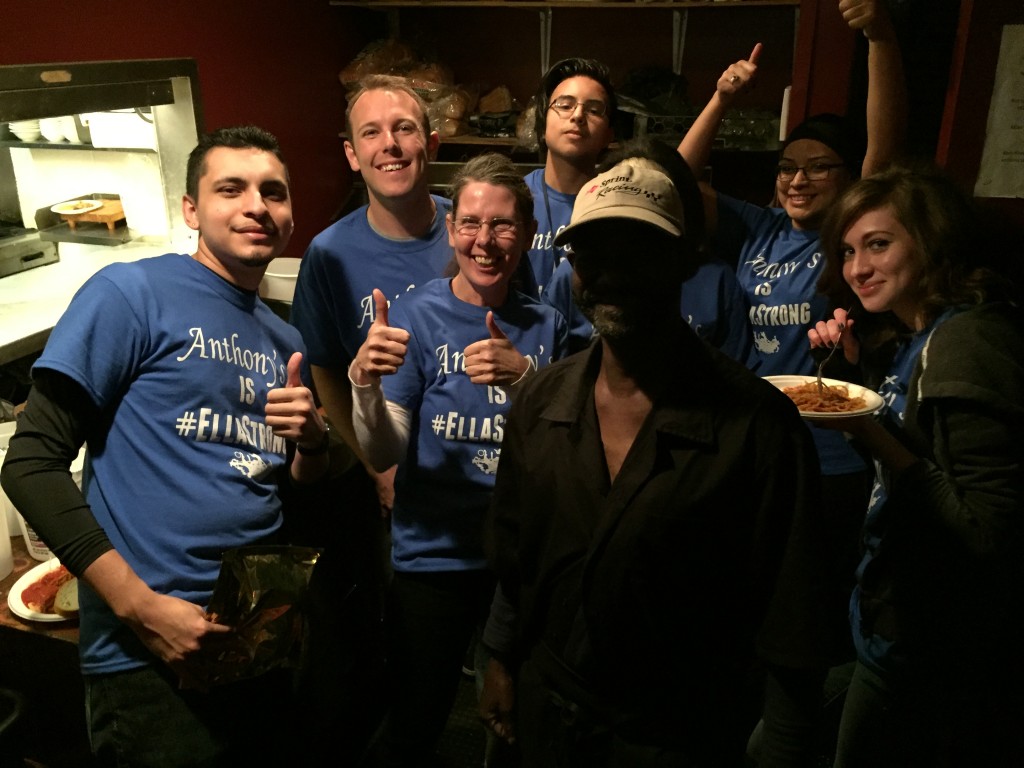 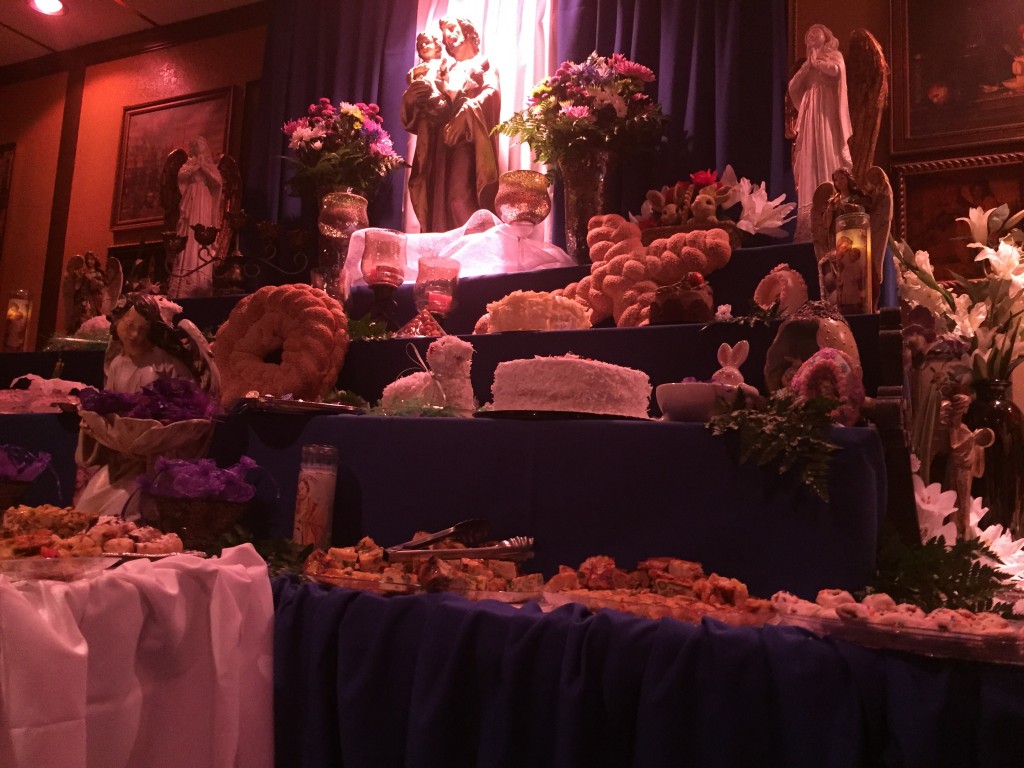 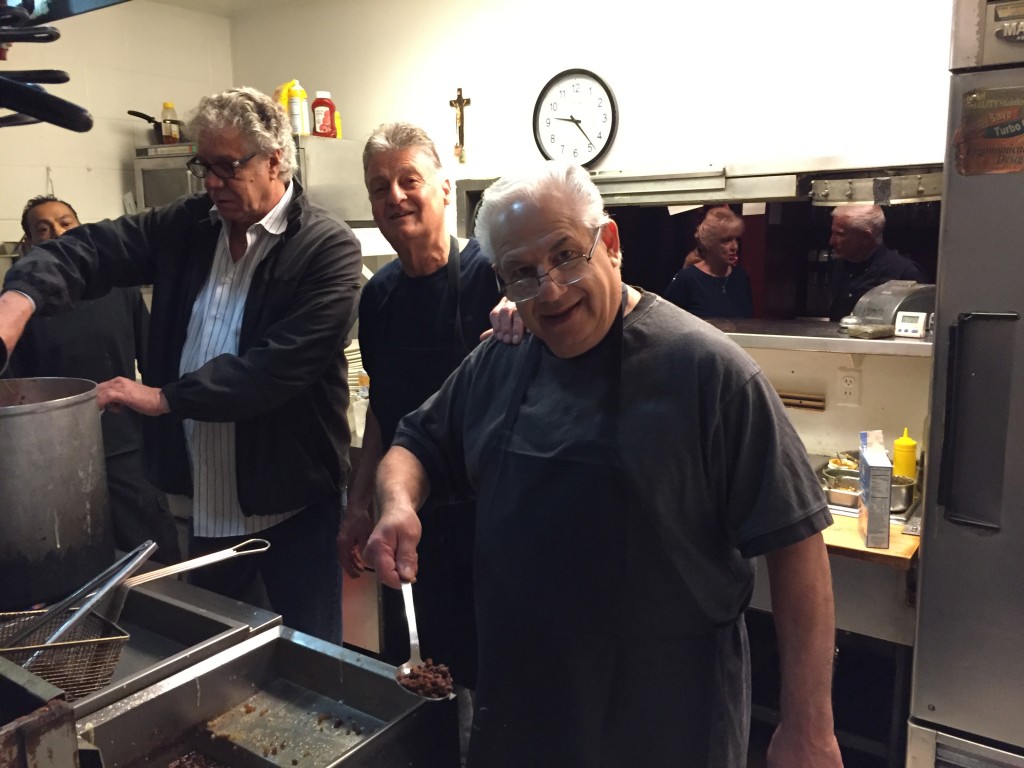 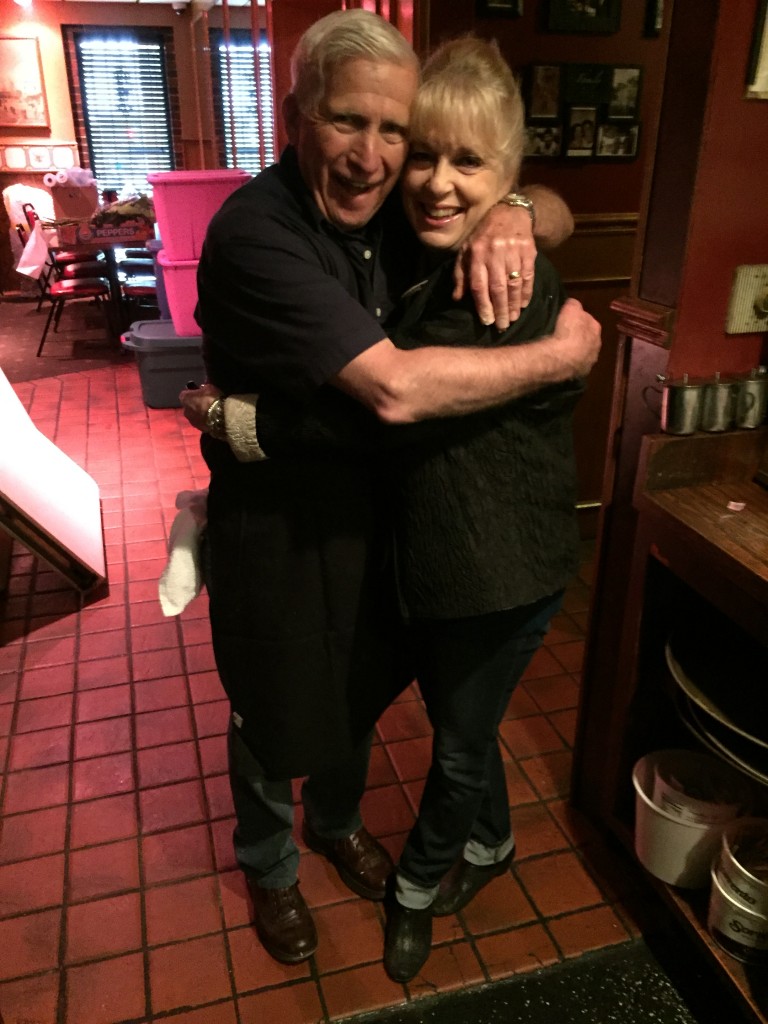 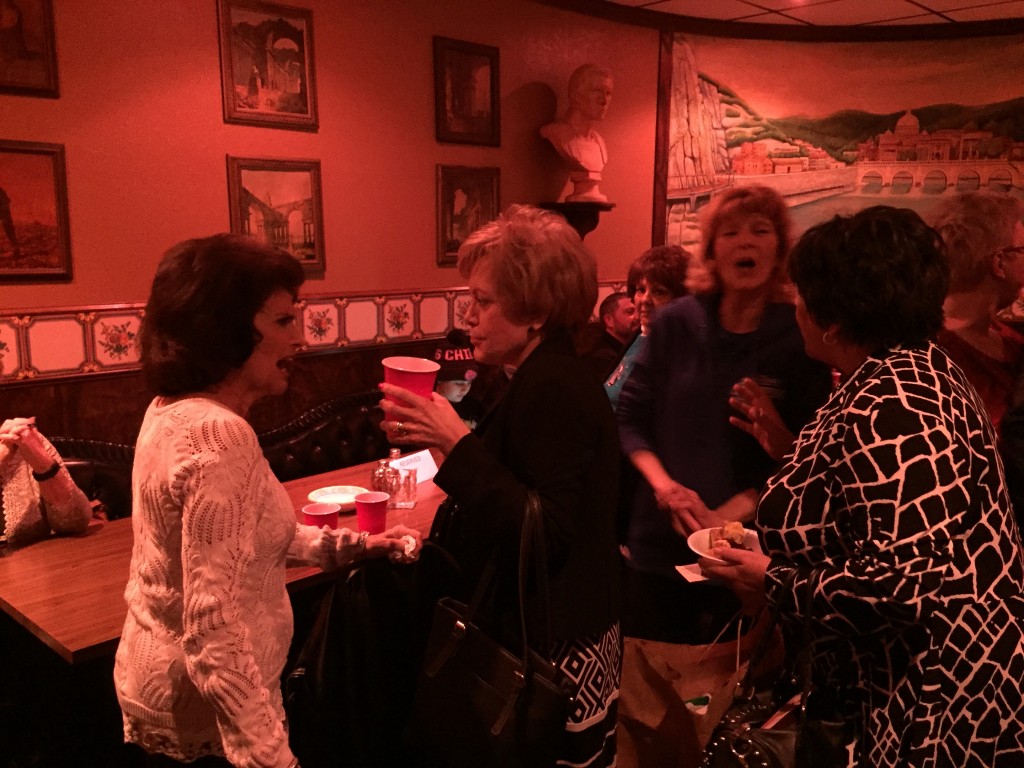 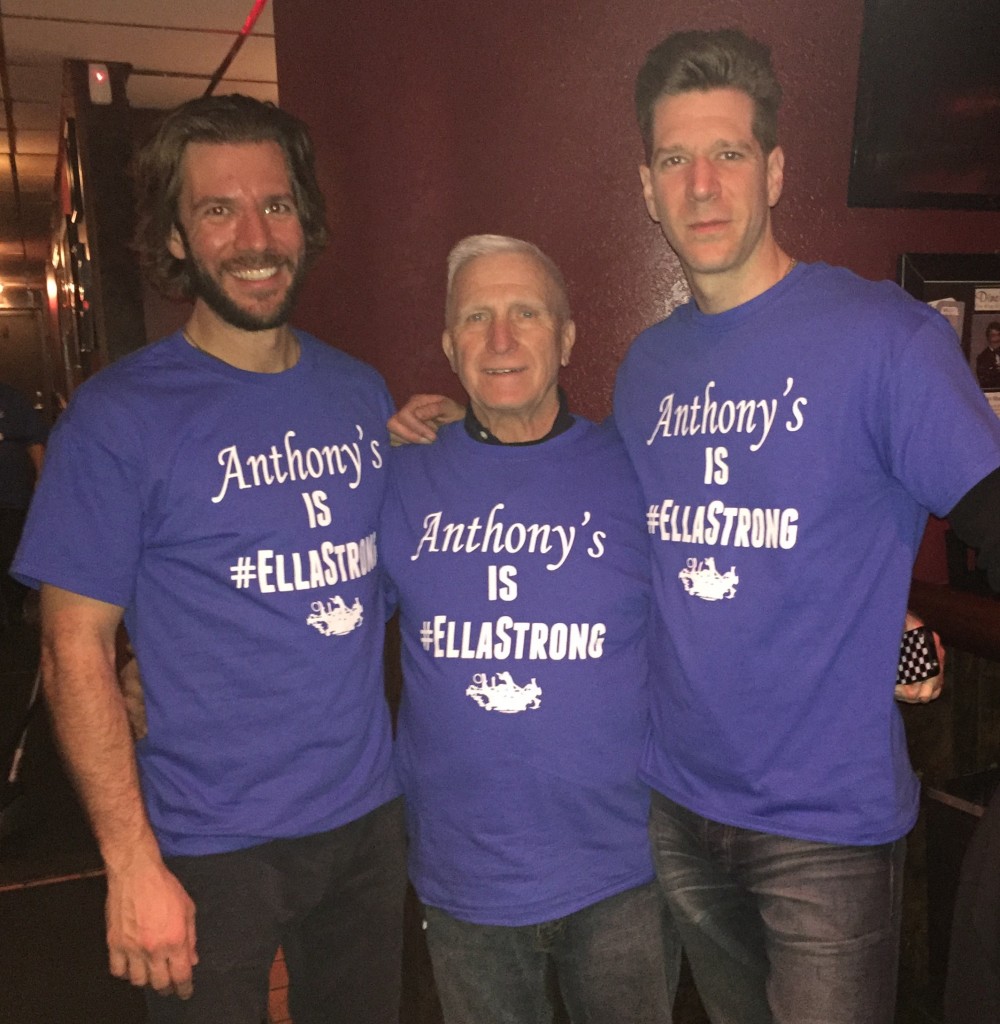 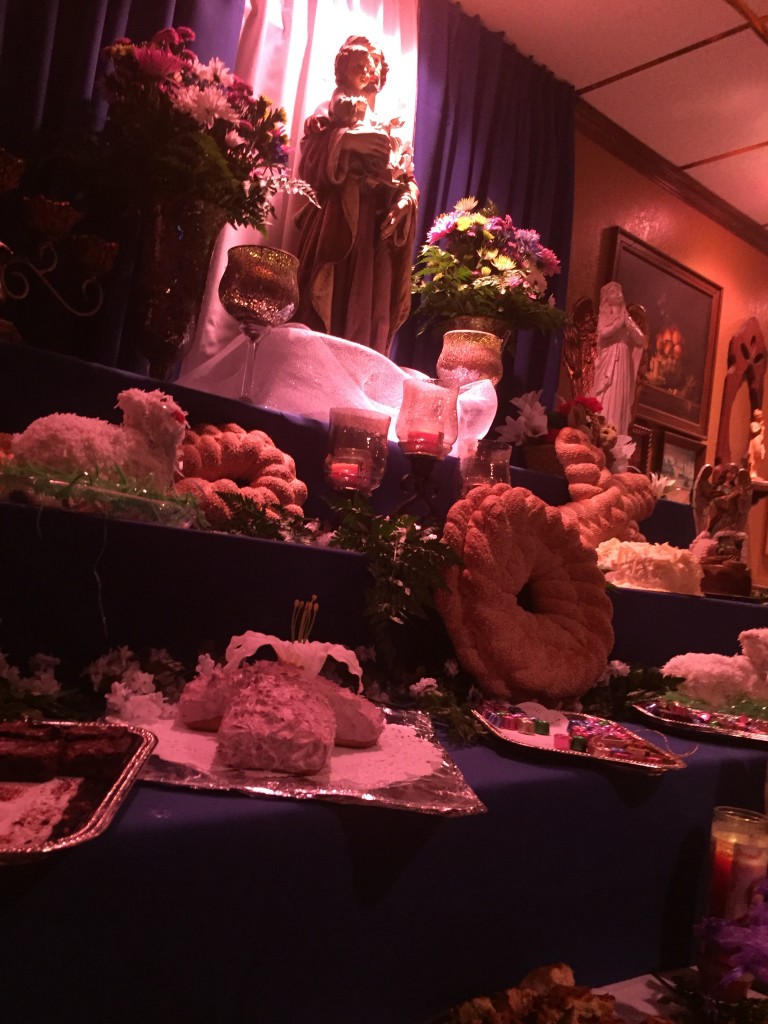 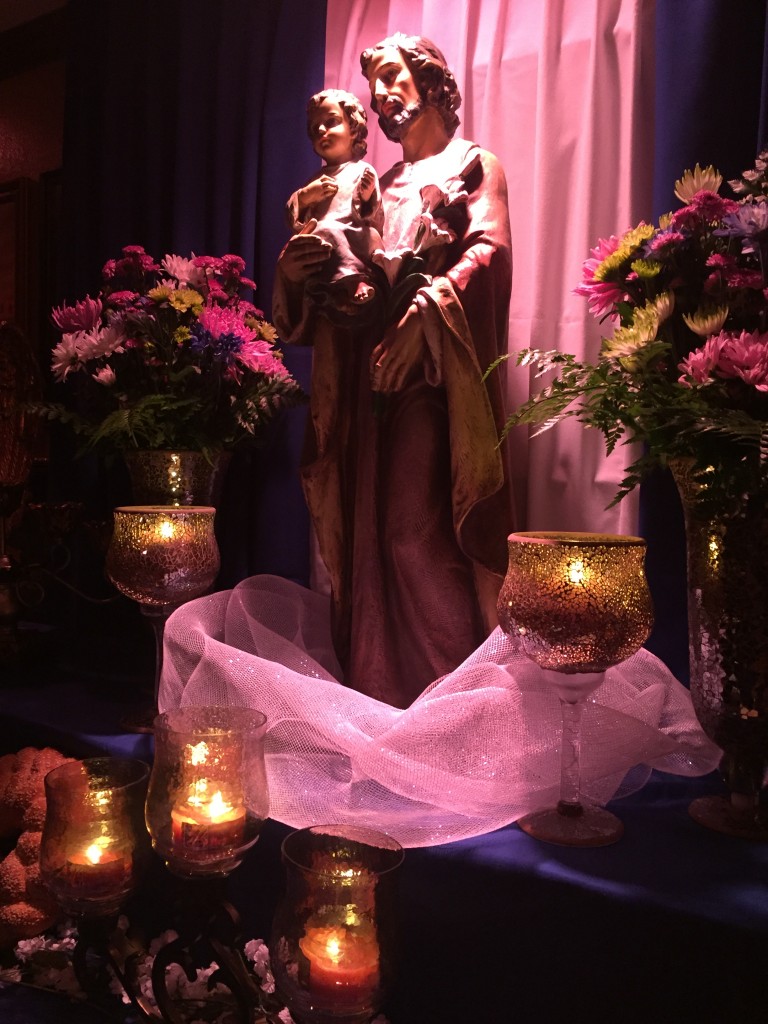 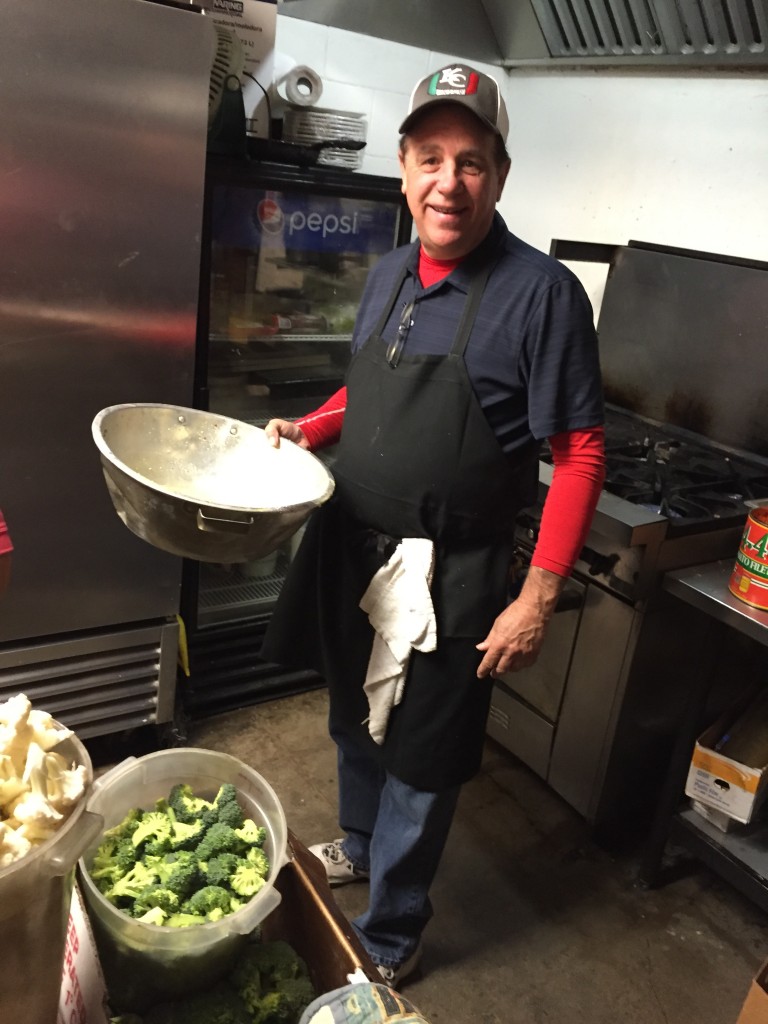 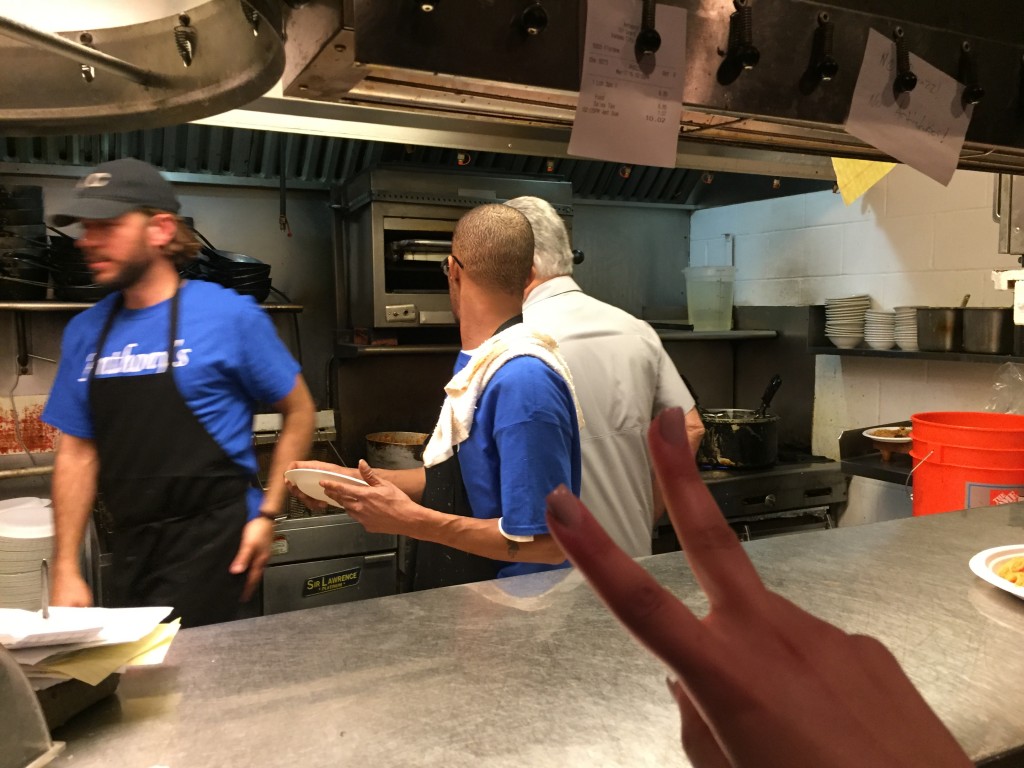 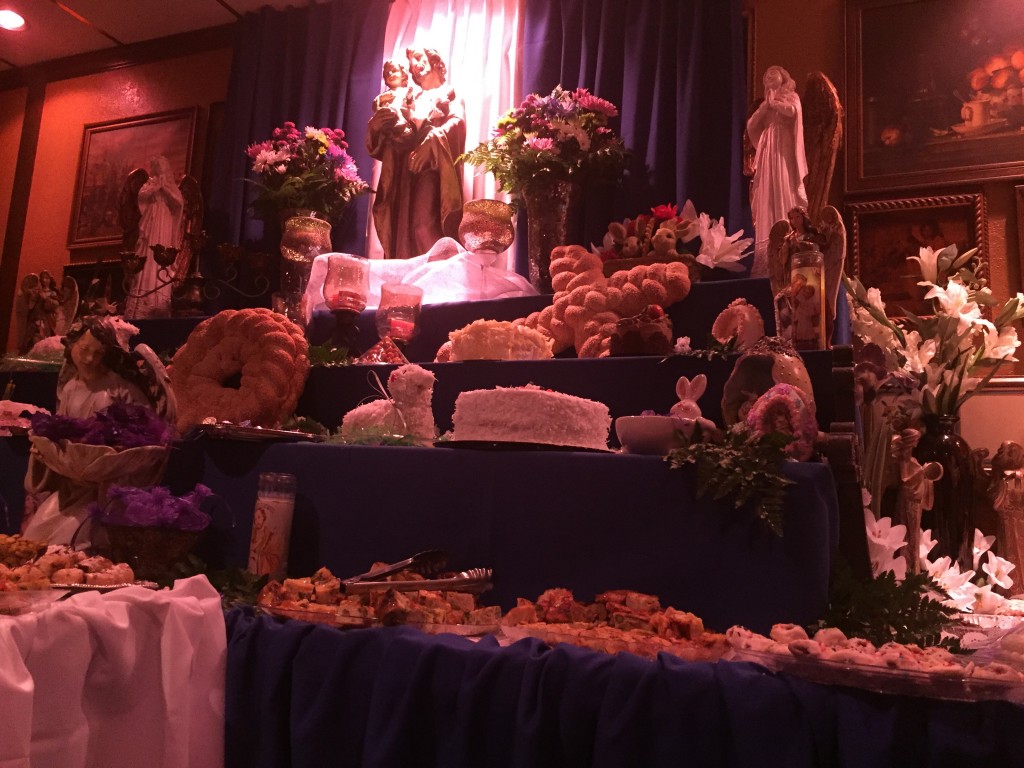 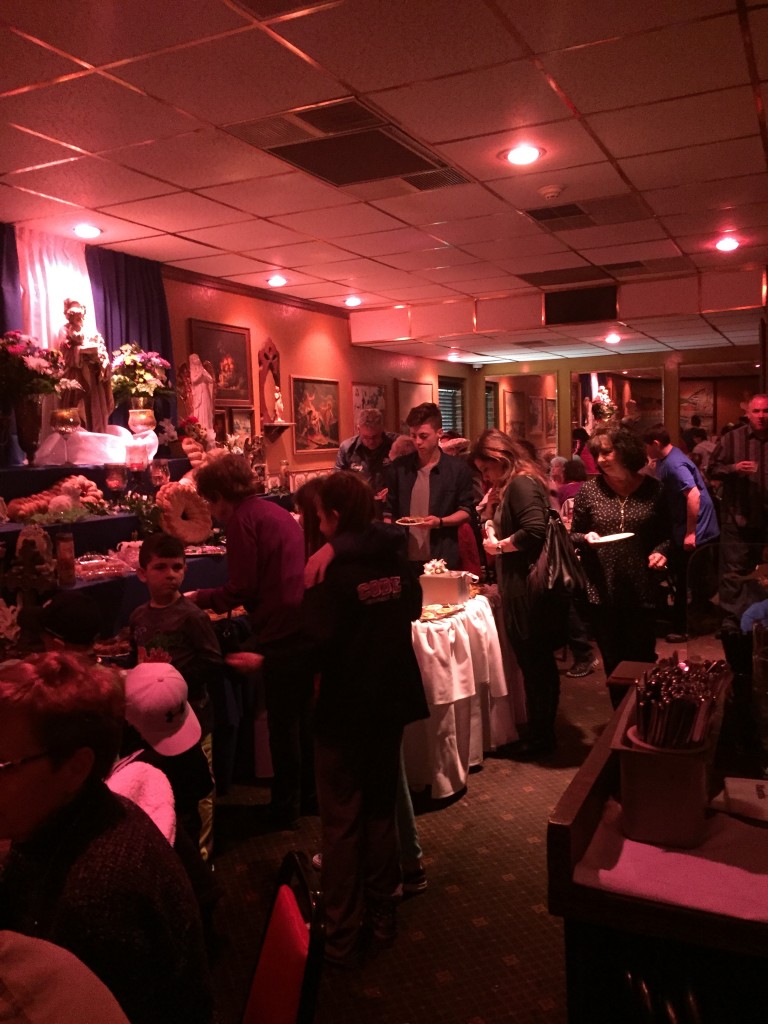 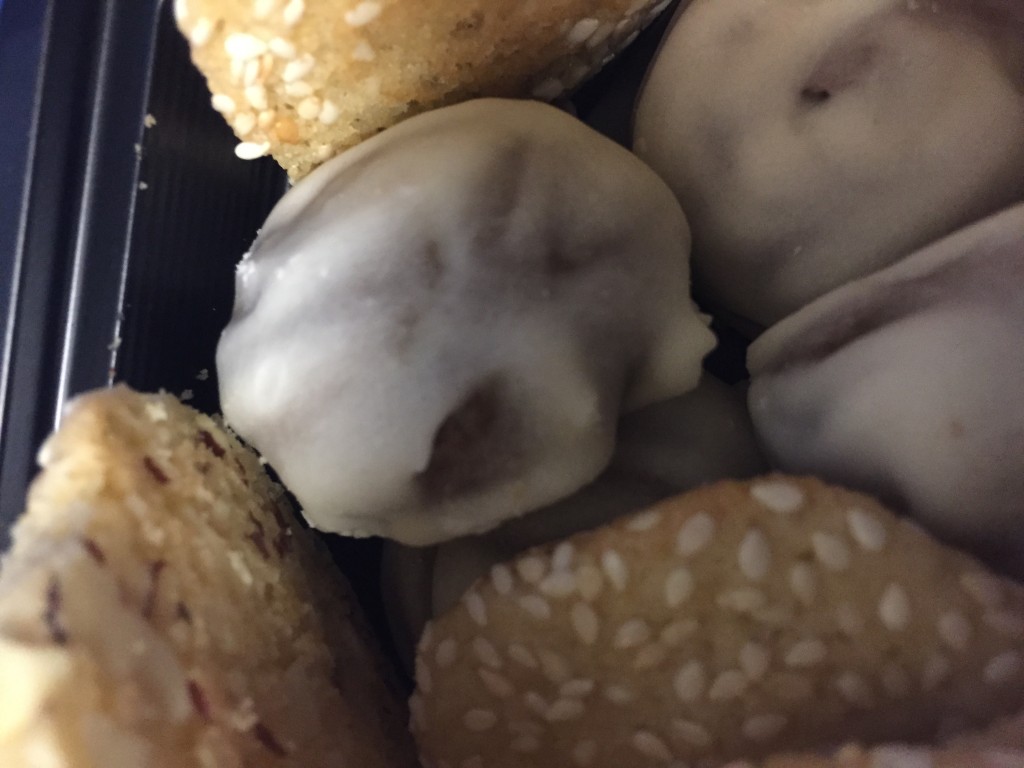 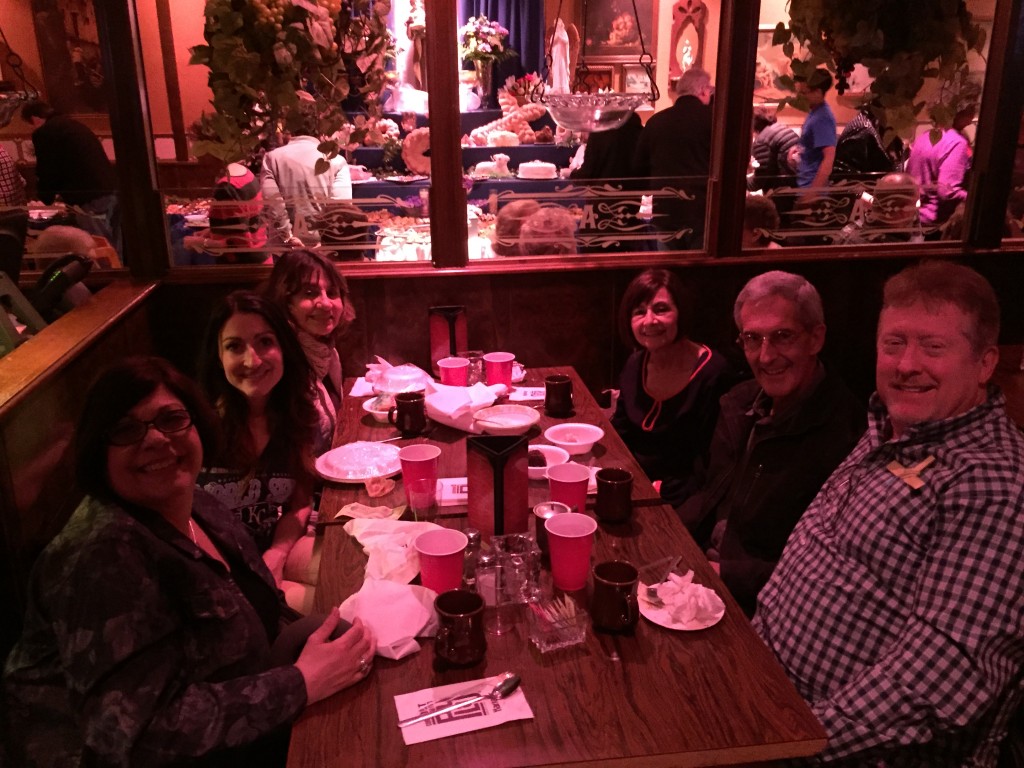