TODAY WAS A TRAVEL DAY. We left Jose Ignacio, Uruguay, this AM to head to Buenos Aires, Argentina. I’ve realized I’ve acquired a definite travel outfit (see in its full glory below). It’s part trucker and part dirty hippie: my gray homeless pants which actually were meant to be cute and going out-y but are so comfortable I’ve worn them every time we’ve traveled; one my workout tanks which so far has never been used for a workout,; and my trusty Birks (Cara Lemieux, be proud). This outfit persists despite finally having our laundry done for the first time in two weeks (I could have gone a month; Anthony started to twitch at the 1-week mark). Had been a great 4 days in Jose Ignacio — endless quiet beaches, amazing little boutiques and restaurants and bars, and so easy and laid back. Last night went to La Huella for dinner — the atmosphere reminded me of Sunset Beach (but the food was so much better thank you gods of restaurants). They played a remix of Sleigh Ride by the Ronnettes and I laughed out load – usually I’m the one buried in ice up to my forehead in February, yet here we were sitting outside on the beach having dinner. Ahhhh. We took a picture by the famous wood-burning oven and I wish I could bottle that smell of the meats cooking on it. Had drinks after at a nearby bar with some live music (kind of a Jack Johnson en espanol) then home to pass out. This AM, a 2-hour drive from our gorgeous beach town to the Uruguayan capital of Montevideo. Three-hour bus from Montevideo to Colonia. Then an hour ferry to Buenos Aires. The bus btw is amazing. Nicer than any I’ve seen before, nicer even than the Hampton Jitney, which rises above the fray of buses. Plus it left 20 minutes EARLY — all of the reservations had arrived and the bus was full, so off we went. OHHH and I had one of the best sandwiches of my life, which I bought in a restaurant in the terminal and brought on board. Named a chivito, it’s often called the national dish of Uruguay, on par with the cheesesteak for Philly. It’s simply a meat sandwich – fried thin pounded beef, fried or hard-boiled egg, lettuce, tomato, and mayo on a hamburger bun — and it is the best thing ever, even coming from a shopping-mall-turned-bus-station (see it here). Other discoveries in Uruguay: wine (like a tannet, which I now love) and also mate tea (I thought it too bitter but A loved it). Finally we found Serial, the podcast that everyone was talking about this past year and that we completely forgot about until our long drive this AM. We downloaded it awhile ago and just today remembered we had it. No way to hook up the ipad to the speaker in the car so I held it up by our ears the entire drive, a la John Cusack in Say Anything without the long trench coat. It is GREAT and I can’t wait to finish it. Tonight we are in Buenos Aires — will get a late dinner, hopefully catch some tango and then off to explore this beautiful city the rest of this week.

BTW Anthony just said to me: we have 5 bags, we have so much stuff, we are definitely not backpackers. To which I replied, that is exactly correct. And thank you for recognizing that. Off to bed. Lots to see and do manana. Pics from Uruguay to follow.

Travel outfit – these clothes have been washed and dried but could still board a plane, a bus and then a ferry all by themselves. 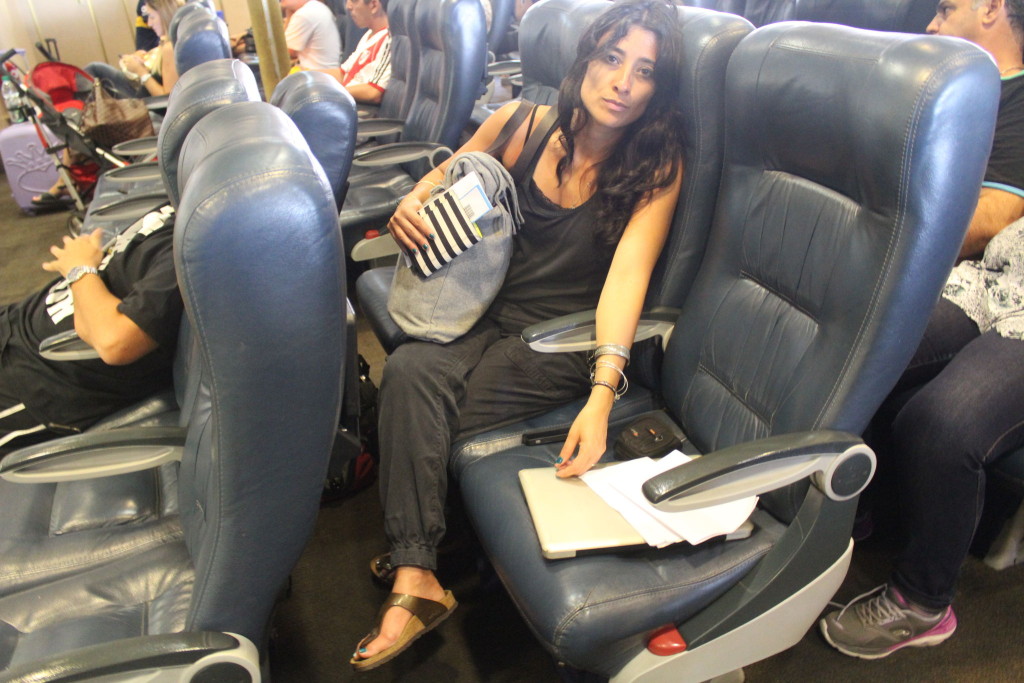 Listening to Serial. He studies the road, I hold up the ipad speaker. 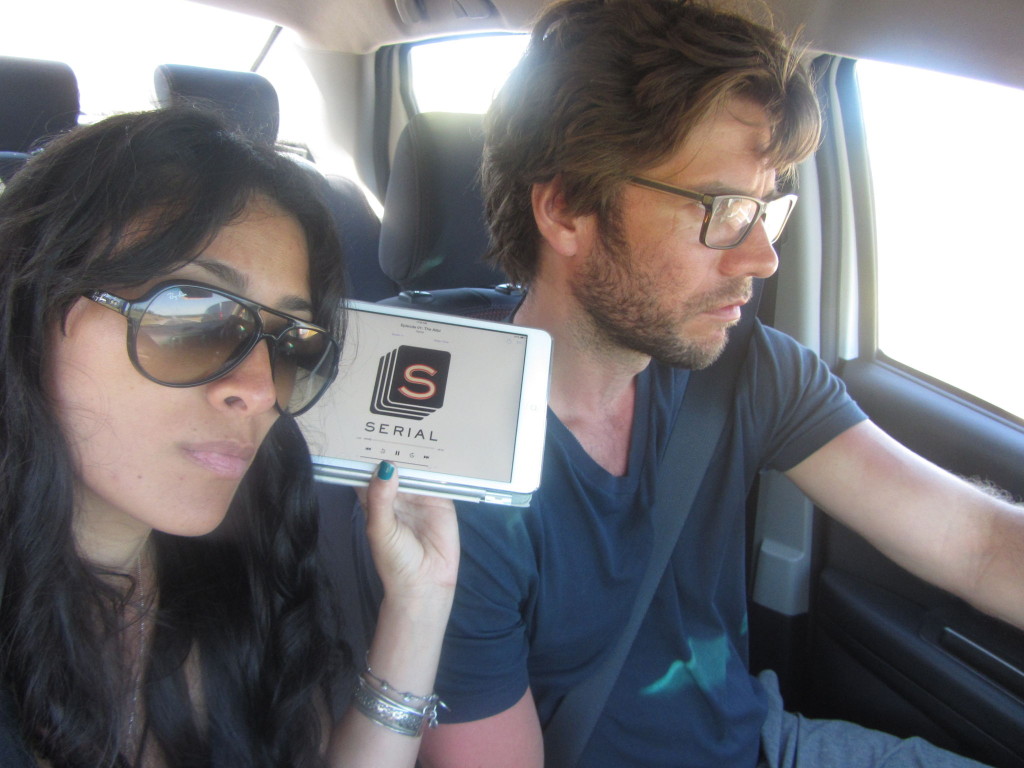 He thinks he’s driving and that I’m holding his hand, which is all true… but justttt in case he needs help shifting gears when he’s going 100mph over windy 2-lane roads (the car beeps every bloody time he hits more than 120 kms per hour), I’ll be right here to help. 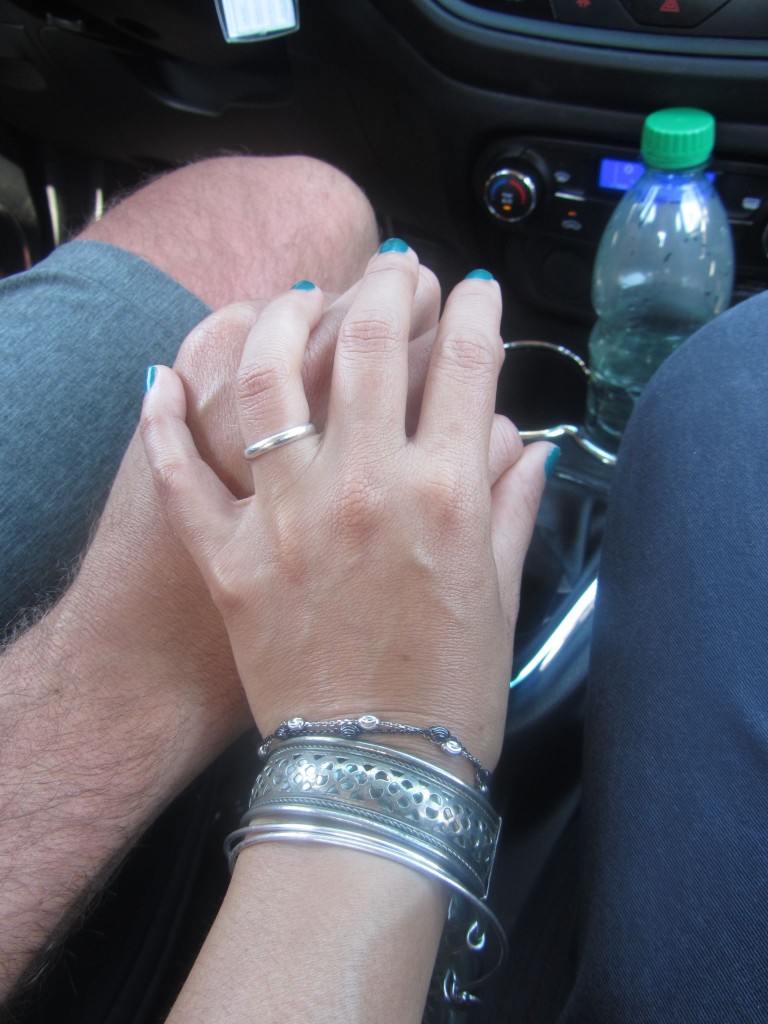