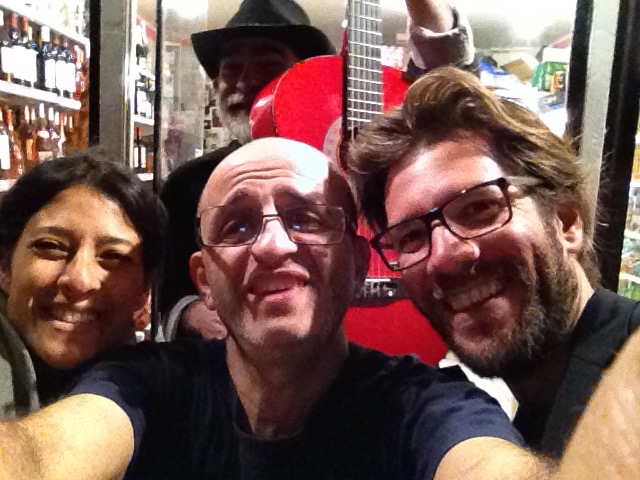 It’s Monday afternoon and the sun has not yet made an appearance today. The rain is lightly falling and the air feels more like the second day of fall than summer – our first cool day since we arrived. A rainy day means we have time to blog, so here I am. These are the final days of our month in Paris and I understand why Denise loves it so much. We’ve done nothing but walk around this beautiful city, eat, drink and socialize. Our first two weeks here we stayed in an apartment two blocks from the river, in the Saint-Germain district.  The area was perfect for visiting the museums, Notre Dame, the Eiffel Tower and is home to many famous cafes that Hemingway, Picasso and other artists visited frequently. Even though Denise loves Saint-Germain, she thought I would dig the area of Montmartre, so we switched apartments halfway through our stay and came up the hill, to the highest point in the city, to where we are now. It is primarily known for the white-domed Sacre Coeur Basilica, or Sacred Heart of Paris, on its peak and is also home of the Moulin Rouge. She was right, this part of town is great.

It feels like the city is taking today as a chance to recover from yesterday’s craziness. We celebrated Fête de la Musique, or World Music Day, a popular festival that started in France in 1982 and now can be found in 120 countries and over 400 cities around the world. The music is played everywhere from the subways, churches, museums, castles, bars and almost every street corner and alley.  There are two ways to enjoy this festival – one is to check out the program with a list of all bands, times, and locations, or two, just get lost in the city.  We decided on option #2 and started on the other side of town at Saint Michel, one of our favorite parts of Paris.  We took the Metro there around 2 p.m. and walked back, stopping at different acts, getting drinks and food, until we got home around 11 pm when it was just getting dark. We heard music of many genres and each act was better than the last. This year’s theme was living together and I believe it set a nice tone for the day.  Not only did we see great rock bands, hip hop and house DJ’s, big jazz and blues bands, but we also saw a puppet show for the kids, an older mime that might have had too much champagne, and two young men keeping tap dancing alive.  My favorite was the Japanese man playing traditional songs from his culture with a huge drum set and a rock’n’roll beat. Denise probably enjoyed the house DJ playing across the street from our apartment until 2am the most. We had a blast and now have another reason to love the French.

We’ve been lucky to get to hang out with so many people here. We’ve seen some great friends from the States and even Brussels, visited Versailles with them, museums, the Eiffel Tower, which sparkles every hour on the hour and can be seen throughout Paris, and Crazy Horse cabaret, with our friends Feldmann and Vicky. We joked that when else can we look at naked girls while drinking champagne with our wives. It’s great too to have friends who live in Paris and because of Denise we do. Their hospitality has been divine: aperos at their house, dinners and drinks out, birthday parties for the kids and a ton of advice on what to see and do. As for me, here in our neighborhood, I thought I’d make friends with the bartenders and waiters. Instead I’m hanging out with guitar players, street musicians and liquor store owners. I sound like a true hobo. But this area really is full of artists and musicians, along with strip clubs and sex shops, and every night is a party. Two nights ago we were coming home from going out with friends and stopped into the bodega downstairs to say good night to its owner, Michele. He makes crepes all night and on a few occasions I’ve been sent the six flights down from our apartment after midnight to get one (if you’re ever in the area you have to stop by Happy Market and say hi for us). At Michele’s place we ran into one of our favorite characters, an older man who shows up every night to play guitar. His voice is almost gone, and you have to strain to hear him talk, but he plays the guitar as naturally as he walks and is always ready with a laugh or a song. He got Denise to sing, and at 3am, on a street corner in the middle of Montmartre, she was belting out Proud Mary, the guitar man was playing his heart out and I played the imaginary triangle. She was just mad she didn’t get any tips. The lyrics were perfect: left a good job in the city, working for the man every night and day, and I never lost a moment of sleep, thinking about the way things might have been.

We’ll post pictures in a few days, but even this blog with all its words, photos and videos can’t explain Paris,  You have to just come and see it.

Where we stayed in Paris:

Where we ate that we really liked (because everywhere is not specific enough):