BUENAS FROM PATAGONIA. Ahhh. I’ve wanted to come here for so long. Specifically we are in El Calafate, in southern southern southern Argentina, almost to Antarctica (map here). It’s completely Colorado meets any ski town with a little Costa Rica surf vibe thrown in: a Main Street (Avenida Libertador) with tons of bars and restaurants and shops, hostels and inns everywhere, outdoorsy people and activities and mindsets, with backpacks as far as the eye can see. Once you get past the Gore-tex, the scenery is absolutely breathtaking. It’s like someone took a paintbrush and used every shade of green and blue that exists. The town is just outside of Parque Nacional Los Glaciares, or Glaciers National Park, which is ginormous. It straddles Hielo Sur, the world’s largest icecap outside of the polar regions, and holds the planet’s third largest glacier chain, after Antarctica and Greenland. Who knew? On the flight here Friday, the pilot took us over the glaciers, then circled back so that both sides of the plane could see. Naturally I freaked out that we were so low and too close to the mountains and I was convinced he didn’t know what he was doing. I kept saying the man should concentrate on flying this large piece of machinery rather than being a Disney tour guide. But it turns out I’m an idiot. Everyone else loved it and even applauded. And it was pretty spectacular to see these aerial views of bright Caribbean blue-green lakes, the dark browns and rich reds of the Andes mountains and the pure white and almost neon blue of the glaciers. This is the most well-known, Perito Moreno, from above. It is massive. 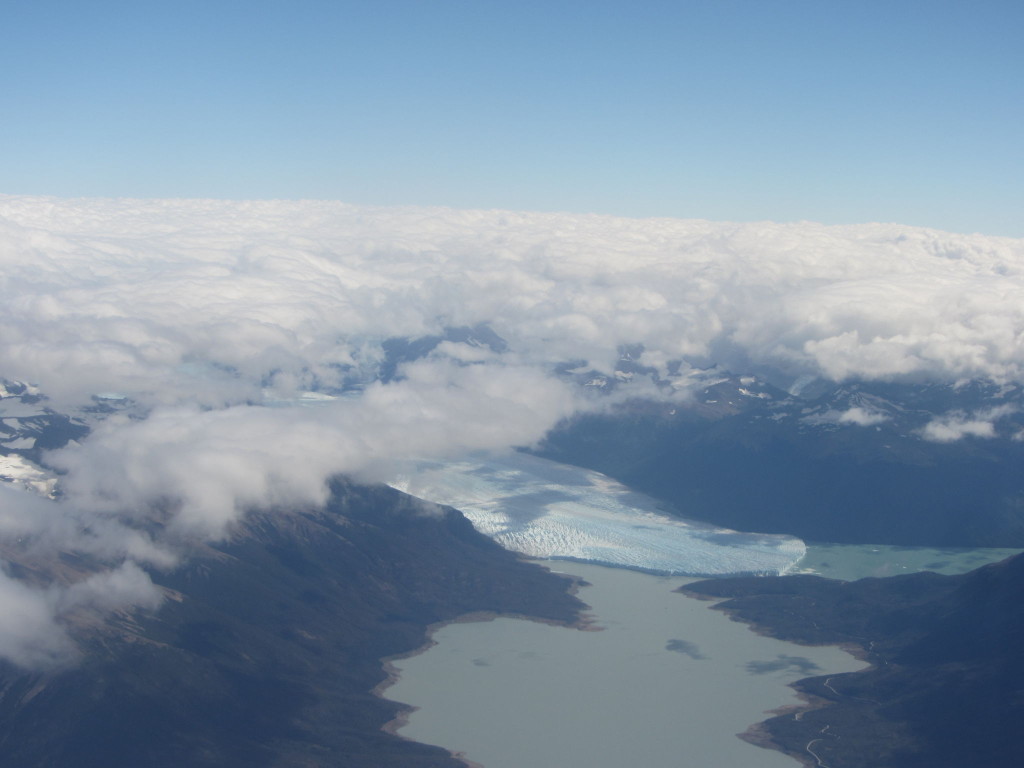 Saturday we trekked Perito Moreno and it was AWESOME. I couldn’t believe we were actually walking on a glacier. We spent the first half of the day viewing it from nearby balconies and watching it calf, and it calves constantly on any regular day. The sound is like thunder, and watching the ice fall into the water and cause huge waves was astounding. Unlike other glaciers which get smaller each year, this one continues to grow and advance — it moves forward 2 meters a day, which apparently is rare for glaciers (yes I am becoming Mr. Wizard). It was Bad. Ass. We brought along lunch — fresh bread, salami, cheese and olives from the supermercado — and sat on a bench eating in the sun (it was 75 degrees) while watching the glacier, which surprisingly enough really is compelling. It may be my favorite meal yet of our entire trip. 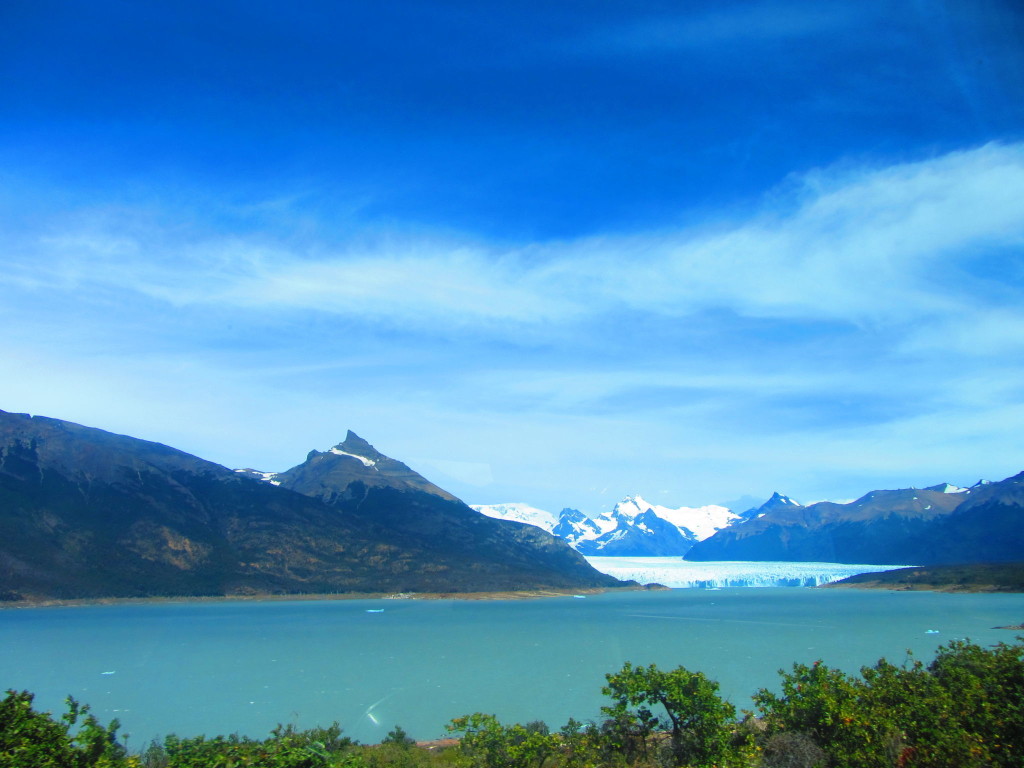 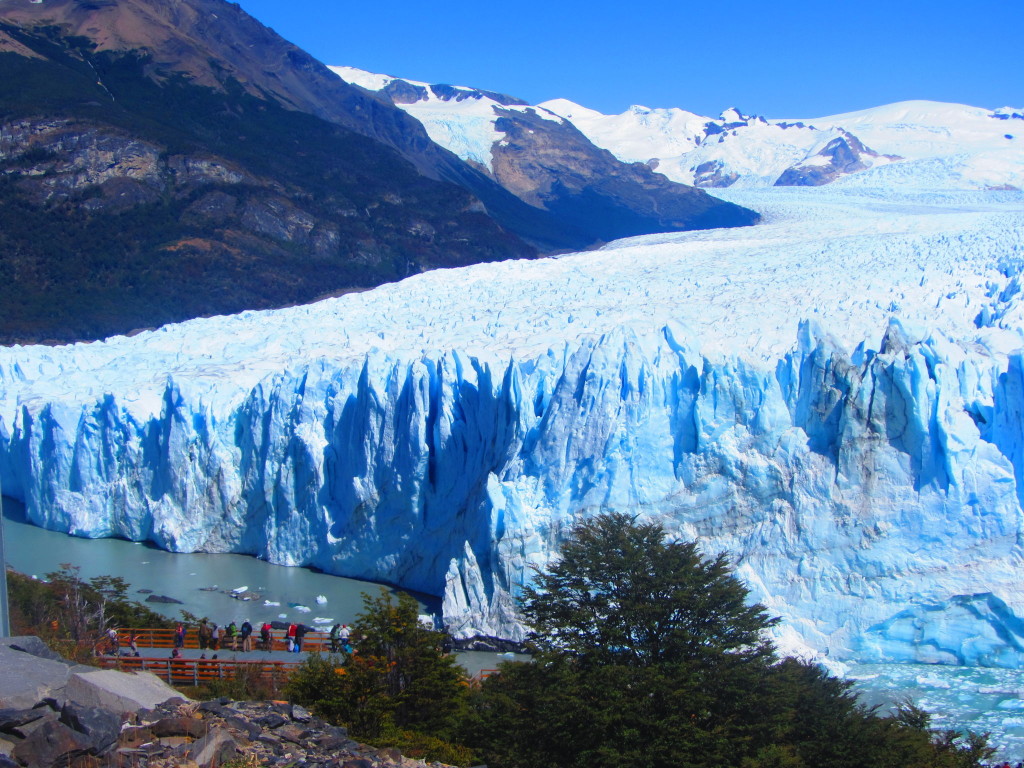 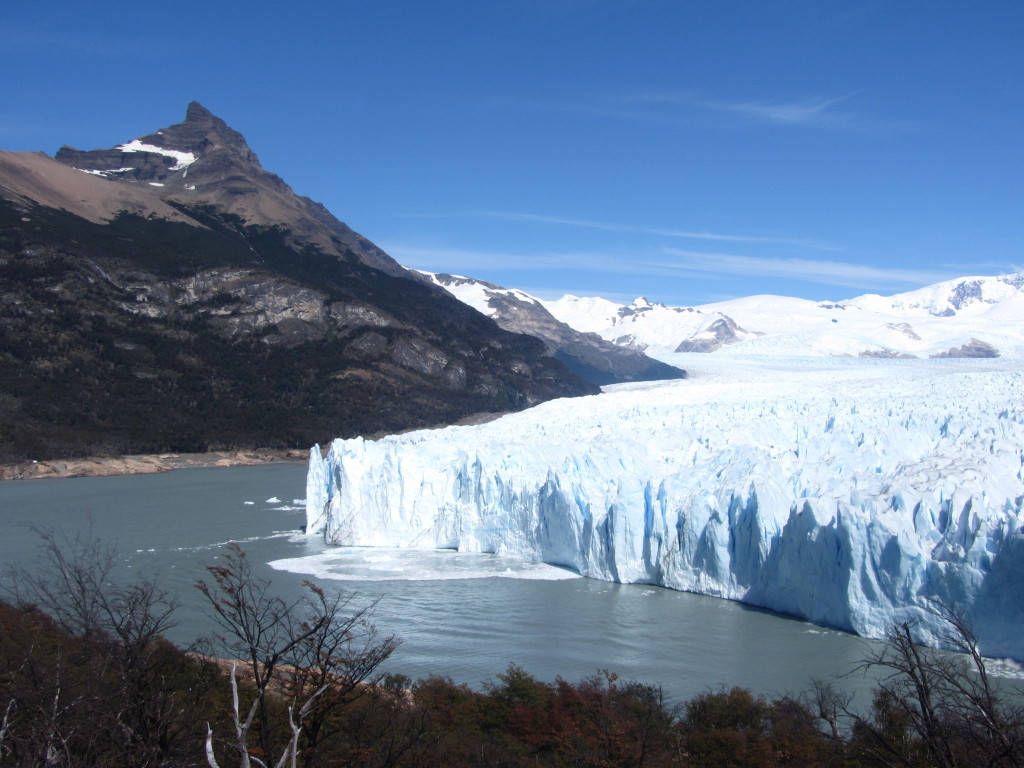 After lunch it was time to meet the ice. Our group hiked up through the bosque (forest) to a small lodge where we put on crampons (yup, this was serious business). Another short hike up to the ice and suddenly WE WERE ON THE GLACIER. It was surreal. The ice truly does look blue, and there are bright blue holes everywhere to the bottom of the glacier that I couldn’t help but stare into and wonder what would happen if we fell in. Streams from melting ice are ubiquitous and the guide told us to drink the water as it’s the cleanest in the world. I dipped a bottle into one of the holes and filled it up, and of course it was ice cold and just tasted like you would expect unfiltered, untreated, untouched water to taste – kind of just pure. We trekked around for a few hours taking it all in and learning about our surroundings. I just couldn’t get over that we were walking on a glacier. My dreams of moving here and adopting the hippie, crampon-wearing lifestyle went down the tubes when the guide picked up that I have remedial athletic abilities (I was always picked last in PE class for kickball). He made me walk behind him for the second half of the trek, calling me his new co-pilot, which is code for you’re slow and in case you wipe out on the ice, better you just hit me than take out the whole group. 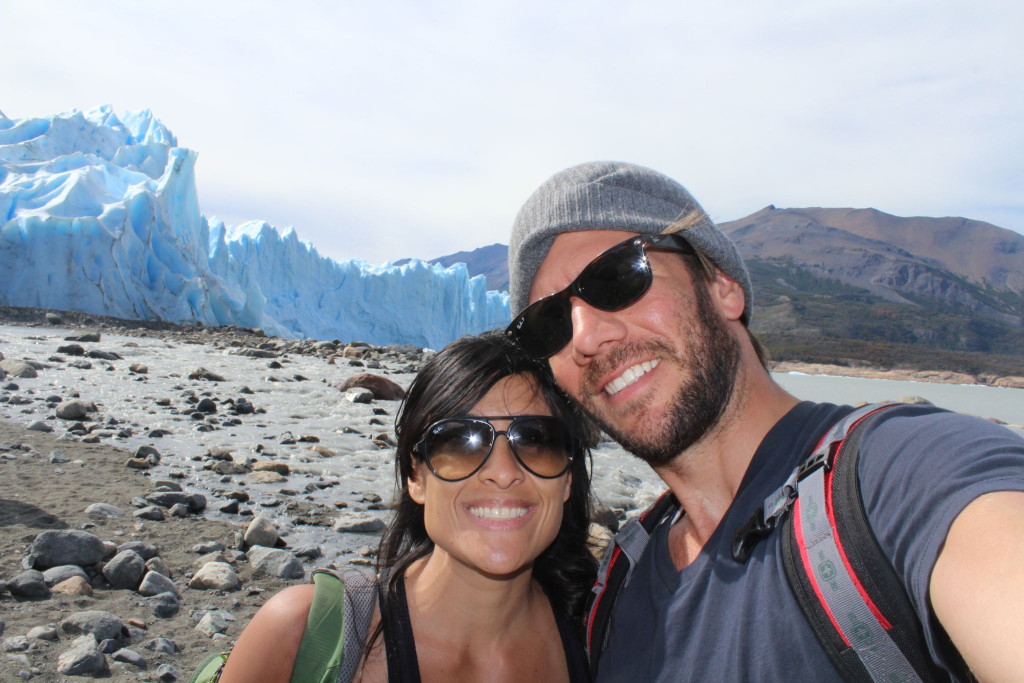 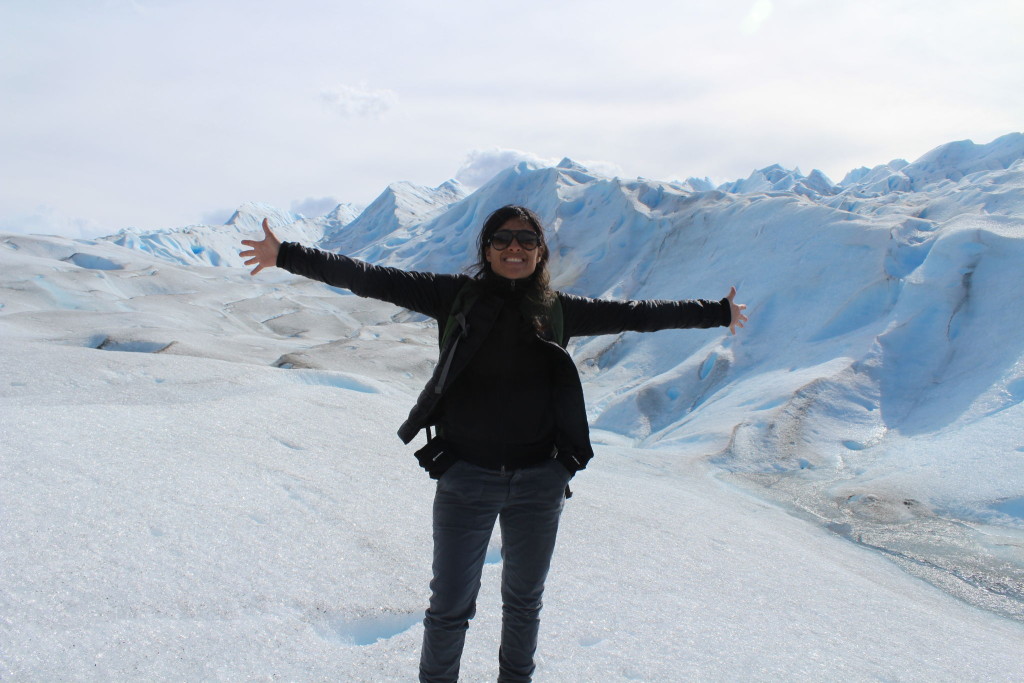 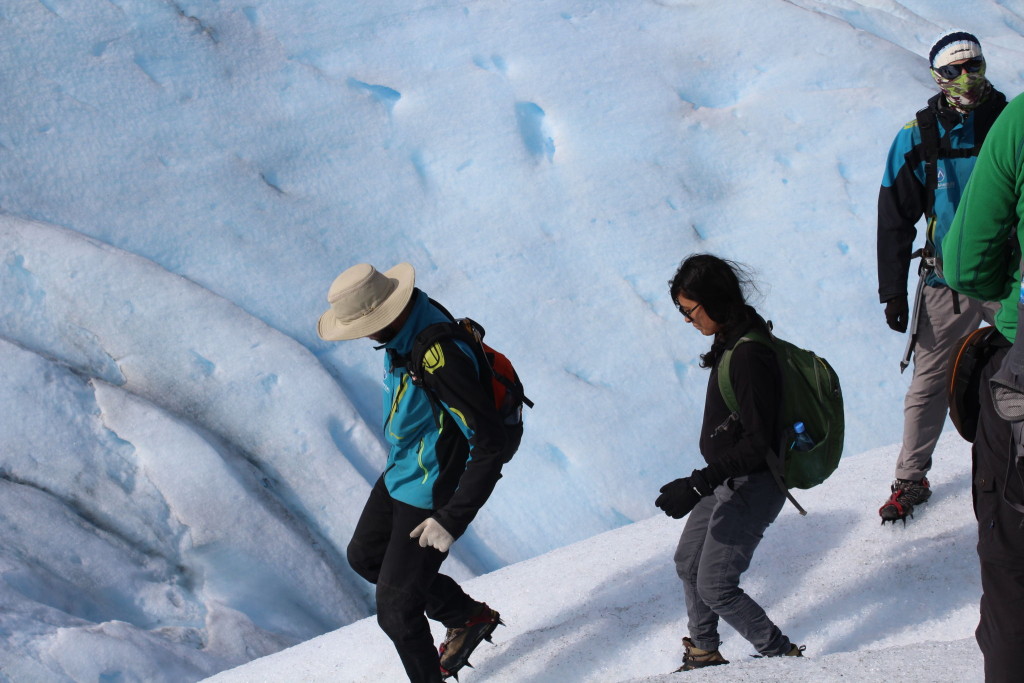 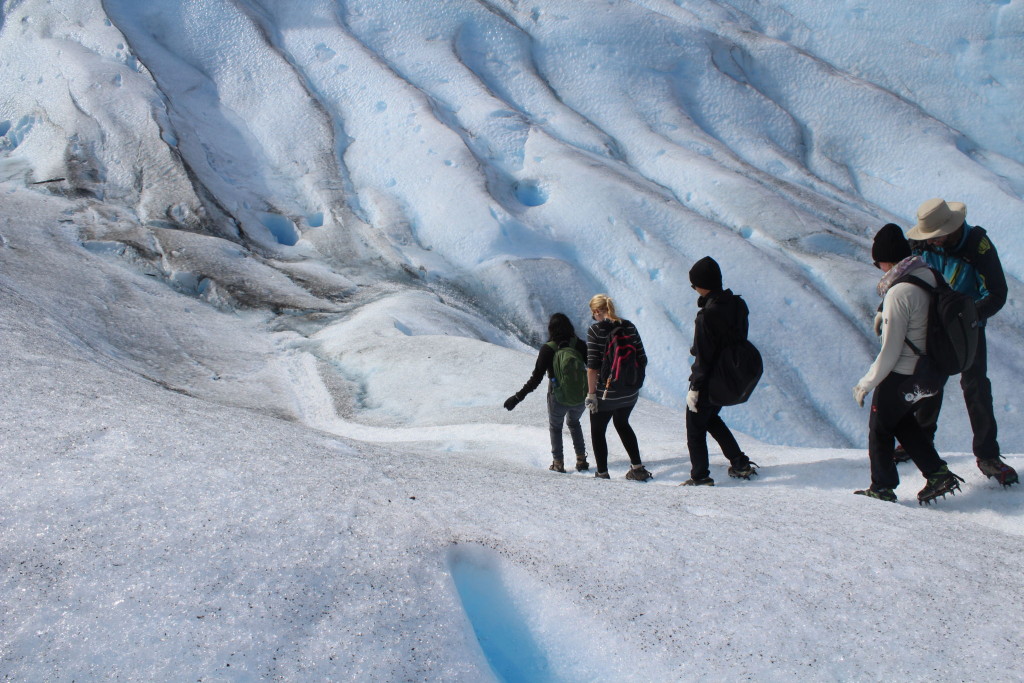 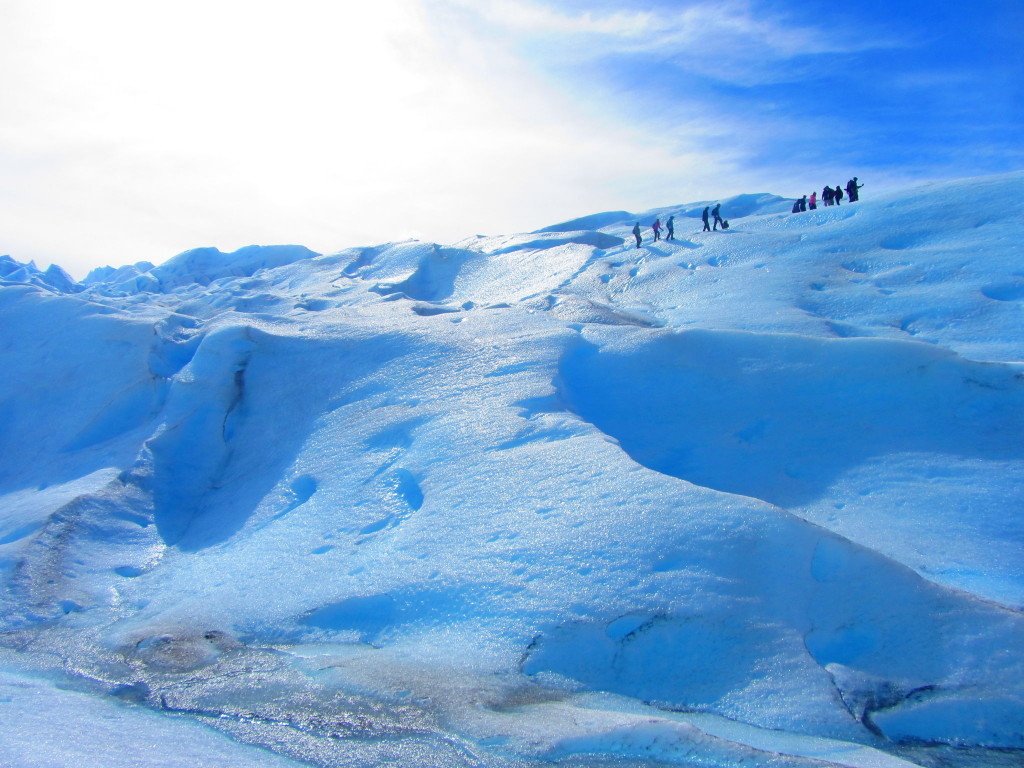 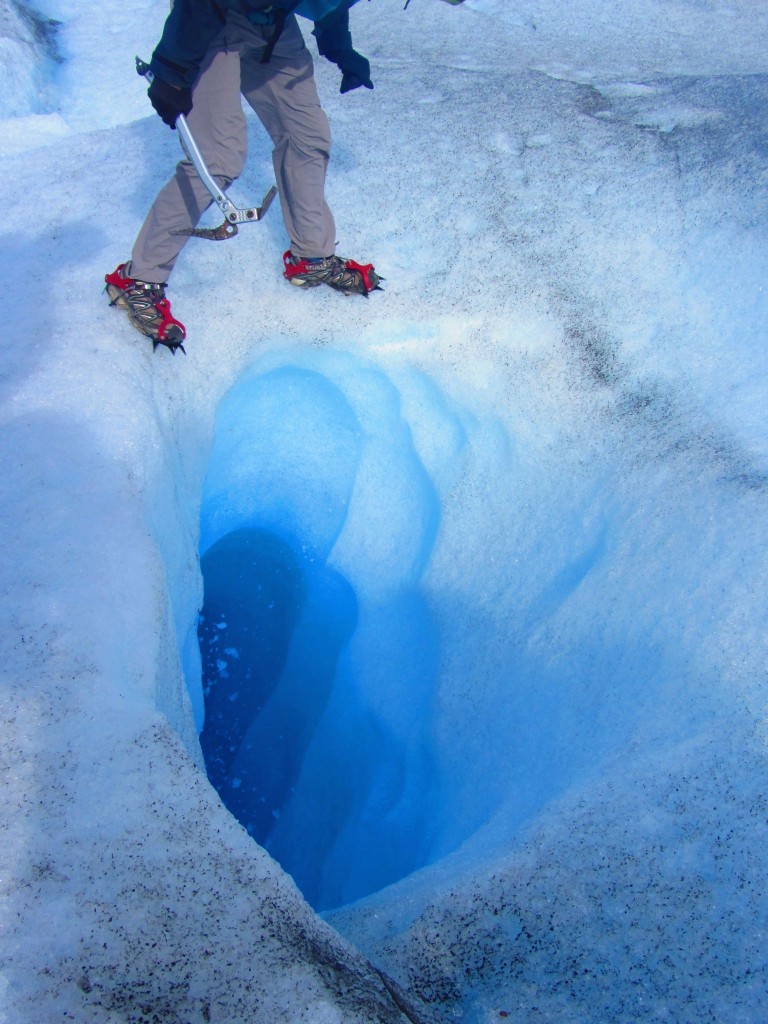 Near the end of the trek we were surprised with a bottle of whiskey, 12 glasses and chocolate waiting for the group. The guides used their pick axes to get ice for each glass, then poured liberally. And for the remainder of the hike the crampons suddenly felt much less awkward and I floated down the glacier. I should have done a shot before I started. Was so excited to take off the hiking boots afterward. We rented them so they weren’t the most comfortable. Shlepped all of our winter gear to sizzling South America just for this part of the trip, and thank God we did because even though it’s 70 and sunny during the day, up on the ice was cold. But the hiking boots we thought would be too heavy, then we realized we may have actually needed them. And lo and behold, we found rentals. Yes it’s gross. But no worse than renting ski boots or bowling shoes. I told A we’ll just have to dip our feet in Clorox. Today more glacier-ing, but all we had to do was oooh and ahhhh from the balcony of a boat. We visited a ton of other glaciers in the area — the biggest we saw is three times the size of Buenos Aires. THREE TIMES THE SIZE. The one we trekked on yesterday was simply as big as BA. And there is still one bigger in this country, north of here, in the park to which we’re headed next. The day started out rainy and cold, which was great as I dressed for yesterday’s weather, but quickly added on my three spare jackets from the backpack once we got out on the water and I could see my breath in the morning air. I felt like Joey being Chandler: “Could I BE wearing any more clothes??” The sun started to come out after a bit and we saw FIVE rainbows throughout the day. PLUS A DOUBLE RAINBOW. A DOUBLE RAINBOW! They were gorgeous. Could see the beginning, middle and ends and all of the colors in between. And the water underneath was clear aqua blue and the ice was white and it was like a movie set. I still feel like maybe it’s not real. It’s just so beautiful. 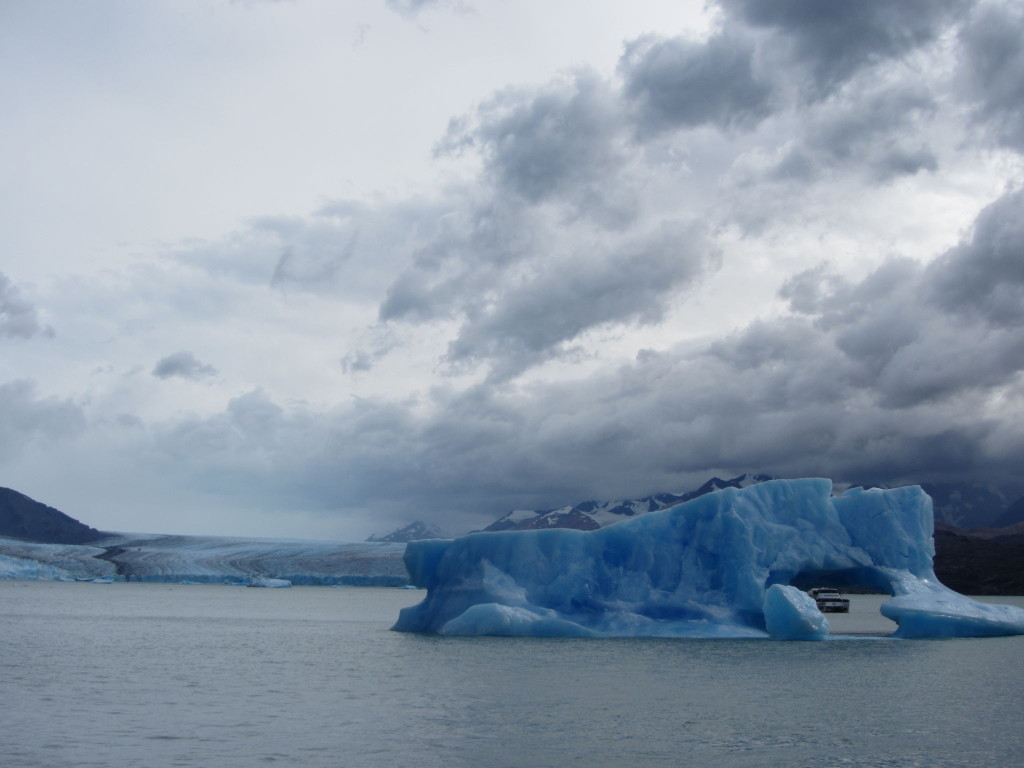 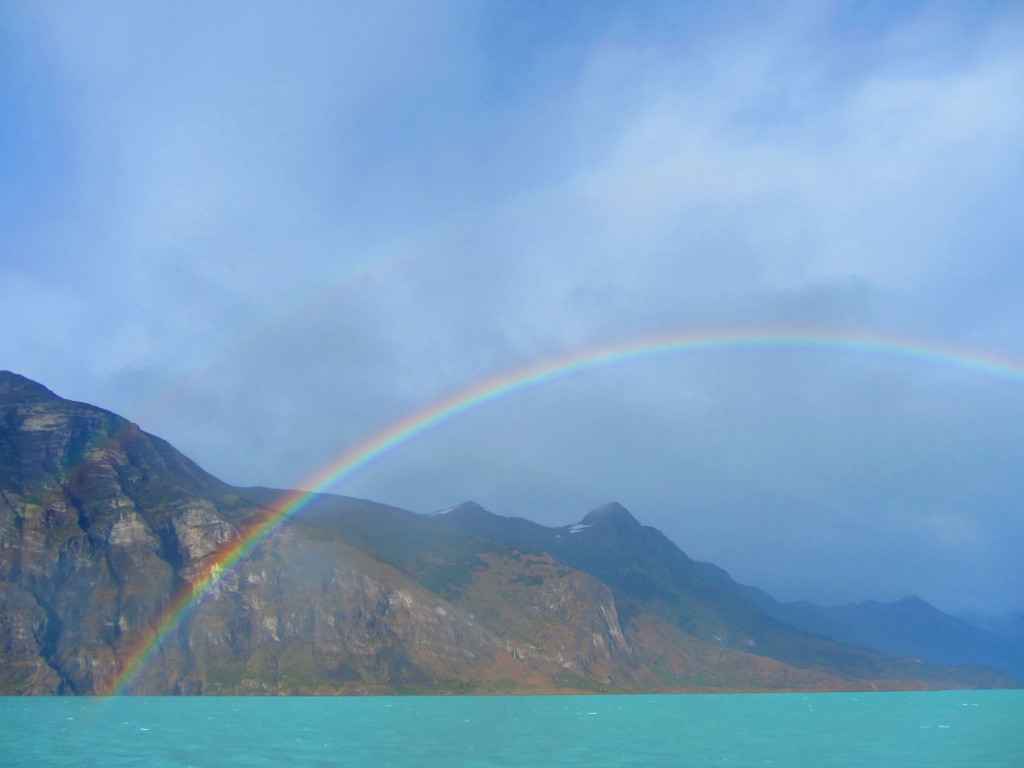 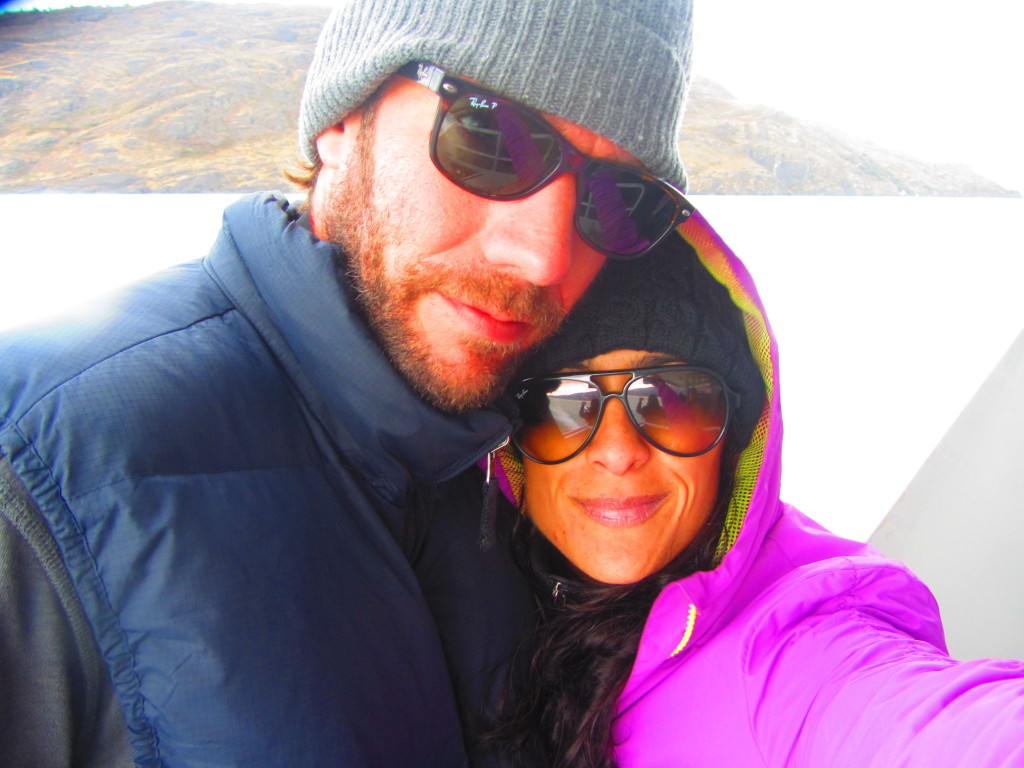 I am dying to post pics of everything we’ve seen so far and I still have to put up photos from Buenos Aires as well. But our hotel’s wifi can’t hack it — I’ve been working on this blog post for two hours. My Meryl quote above applies to this place in more ways than one. Also we barely have hot water and at night the rooms are so bloody hot and there’s no functioning AC. On the plus side there’s a club nearby that pumps ip it’s techno music every night from 4-6:30am, so just in case you didn’t really want to sleep until your 7am alarm, you’re in luck. But I’m just chalking it all up to the experience.

How incredible this all is.

Where we are staying in El Calafate, Argentina (Patagonia):